The Moon is the fifth largest moon in the solar system and the brightest and largest object of our night sky, in addition to the Earth, the moon is the only place in space that the man has walked by for the moment.

The fact that it is simply called Moon, even though we know that there are many more, is because when it was discovered in the sky, the fact that there were other moons was unknown.

It was not until 1610 when the Italian astronomer Galileo Galilei observed four moons in orbit around Jupiter when we realized that detail. Be that as it may, our Moon still represents the only natural satellite that our blue planet possesses.

Here are some curiosities about the moon, which perhaps you did not know …

Since the mass of the Moon (the amount of matter it contains) is less than that of the Earth, the Moon has a weaker gravitational pull, only one-sixth of the attraction of our planet.

This means that every object is six times lighter on the Moon than it is on Earth, imagine how complicated it is to walk on it! Or how high you can jump!

Mass, gravity, weight … Let’s see if you clarify us… if we drop a feather and a hammer on the moon …

2- Without a space suit on the Moon, the blood would boil 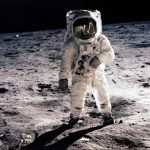 Technically it is said that a liquid boils when its pressure and temperature conditions for the phase change are given at atmospheric pressure. At that moment you can change your liquid state and move to the gas phase, you have enough pressure to do it. The Moon has an almost non-existent atmospheric pressure, so any liquid that is faced with zero pressure boils immediately. In this case it is even said that the liquid is “overheated”, since its internal pressure is not equal but is greater than the outside, it boils violently and instantaneously.

It is therefore important to travel, walk, … with a pressurized suit. AstroJessica on Twitter

3- On the Moon, it is impossible to whistle.

The atmosphere of the Moon is so light that the wind can not run, it is practically empty, so the sound does not spread. This is one of the reasons why it is impossible to whistle there, although no human could try to do so since you can not survive on the Moon without a space suit ….

4- More people have gone to the Moon than to the depths of the oceans.

You may think that reaching the moon is terribly complicated, and that is true. But there are areas of our planet that have been harder to explore than outer space, for example the depths of the ocean.

While a dozen people have walked on the moon, only three have accessed the bottom of the ocean. The first of them was Don Walsh and Jacques Piccard, in 1959, and no one returned to the depths until half a century later. “We did not have the same luck as the astronauts,” Walsh said in a report a few years ago, referring to his fact, as difficult as it was, never had the same media fame.

Apollo 15 was the ninth manned mission of the Apollo program (officially called AS-510), was launched by a type Saturn 5, in the direction of the Moon.

It was the first of the type J missions, that is, with modifications in the spacecraft that allowed a flight duration of up to 14 days.

After landing, Scott reconnoitred the terrain through the upper hatch of the lunar module for 33 min. After descending from the “Falcon” moon landing module, astronauts Scott and Irwin used a LRV (Lunar Rover Vehicle, manufactured by the Boeing company and General Motors Delco Electronics) for the first time, covering a total distance of 27 , 9 kilometers.

Most people remember or know that on July 20, 1969, the first man arrived on the Moon, and perhaps many think that it was the only one, and others, that from that moment astronauts have visited it frequently. Neither is totally true: the reality is that 12 astronauts stepped on the satellite, but all in a very few years. The last ones did it in 1972. Then, the countries with a greater development in space travel, such as the United States and Russia, stopped sending manned missions, mainly for economic reasons.

7- The surface of the Moon is smaller than Asia.

We know that the moon is much bigger than we see it, but that should not lead us to think that it is huge: with 38 million square kilometres, it is smaller than the Asian continent.

8- Each year the Moon moves away from the Earth 3.8 centimetres.

This distance is due to the fact that the pull between the Earth and the enormous mass of water that is on it causes that, with time, the Earth turns a little more slowly on its axis. The Earth and the Moon are united by a kind of gravitational embrace. The Moon is kept in orbit by the gravitational force that the Earth causes on it, but the Moon also exerts a gravitational force on our planet and this causes the movement of the Earth’s oceans to form a tidal bulge. Due to the rotation of the Earth, this tidal bulge actually sits slightly ahead of the Moon. Some of the energy of the spinning Earth gets transferred to the tidal bulge via friction. The tidal bulge feeds a small amount of energy into the Moon, pushing it into a higher orbit

To know more, it is well explained in Ask an Astronomer

You want to know more? We leave you a couple of very interesting links!

Get awesome updates in your inbox

We use cookies to ensure that we give you the best experience on our website. If you continue to use this site we will assume that you are happy with it.Yay!NoRead more
Revoke cookie's consent